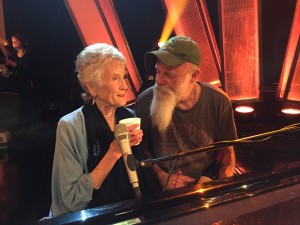 It’s been a busy couple of months for Peggy Seeger:

She and son Calum MacColl won Best Original Song at the recent BBC Radio 2 Folk Awards for their song ‘Swim To The Star’ which appears on Seeger’s latest album, ‘Everything Changes’.  The award was presented to them at the ceremony in Cardiff’s Millenium Centre by Billy Bragg.

Peggy was invited to perform on the iconic music show Later …. with Jools Holland.  She gave a moving performance of ‘When Fairy Stories End’ (also from ‘Everything Changes’) and was interviewed by Jools about the album. Also on the show was Seasick Steve, and as you can see, the two seemed to get on well!

An interview the same week on the couch at BBC Breakfast made for a bit of a contrast: https://youtu.be/j2GBxQhphWA

Seeger and sons Calum and Neill are heading out on tour this month (June).  They play 16 dates the length and breadth of the UK including a London date at the Queen Elizabeth Hall.